Wanna Get Lucky by Deborah Coonts 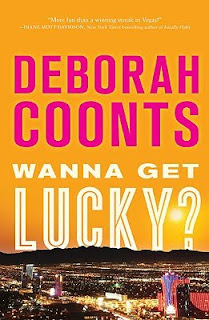 A young woman plunges from a Las Vegas sightseeing helicopter, landing in the Pirate’s lagoon in front of the Treasure Island Hotel in the middle of the 8:30 Pirate Show.  Almost everyone writes her off as another Vegas victim.

But Lucky O’Toole smells a rat.  She’s head of Customer Relations at The Babylon, the newest, most opulent mega-casino and resort on the Strip, so she’s got a lot on her plate: the Adult Film industry’s annual awards banquet, a spouse-swapping convention, sex toy purveyors preying on the pocket-protector crowd attending ElectroniCon….  Still, Lucky can’t resist turning over a few stones.

When a former flame is one of the snakes she uncovers, Lucky’s certain she’s no longer dealing with an anonymous Sin City suicide.  To top it all off, Lucky’s best friend Teddie—Las Vegas’ finest female impersonator—presses to take their relationship to the next level.  Leave it to Lucky to attract a man who looks better in a dress than she does.

Lucky must manage the Babylon’s onslaught of outrageous festivities, solve a murder, and struggle to keep her life and libido from spinning out of control… not to mention keep her balance in six inch heels.

Wanna Get Lucky is a fun, fast paced read. A murder mystery and love story twist through these pages amidst all the chaos and debauchery Las Vegas has to offer.  I whipped through this chick lit mystery and giggled frequently along the way.

I loved Lucky O'Toole's character.  She is full of brawn, brains and had a great sense of humour.  She's far from perfect though and I loved seeing her character grow through the story. And it wasn't just her character I enjoyed. From Lucky's female impersonator love interest, Teddy, to her madam mother, each character is unique and unconventional, but I didn't expect anything less with the Vegas setting.

This story moves along rapidly and the intrigue of the murder mystery as well as Lucky's personal life and history kept me flipping pages. Wanna Get Lucky has all the glitz, glamour and gambling of Las Vegas, along with all the oddities and unconventional scenarios one would expect.  They are all worked into the novel impeccably and nothing seemed out of place or unusual, even though Lucky does run into some highly unusual situations in her position as head of customer relations for the megacasino she works at.

I can't wait to sink my teeth into the sequel, Lucky Stiff (Lucky O'Toole)

and see what else Deborah Coonts has in store for us!

One of the best things about main character Lucky O’Toole (apart from her name!) is that the reader is treated to an extremely strong woman.  Despite her somewhat strange upbringing Lucky has fought her way to a very powerful position at a powerful business in a very powerful town.  All this strength though doesn’t mean that we aren’t also treated to an inner tier of Lucky’s personality with the love story side-plot of this murder mystery.


From the first few pages I was pulled into the mystery surrounding a woman’s fall from a helicopter in front of hundreds of tourists in the middle of the Vegas strip and so I immediately appreciated this chick lit mystery.  But further into the story, more than the actual plot, I think I enjoyed the characters the most. Nothing about this novel is conventionally romantic and for me this is what made it so much fun.  I definitely laughed aloud from the profanity-shouting bird Lucky’s got living with her to the female impersonator she seems to be falling for (definitely not your regular romantic love interest).  I really liked that Lucky was trying desperately not to let herself fall for this guy and is even looking for a connection with another man, Paxton Dane, a new employee of the casino she’s been working closely with.  This pushing away didn’t feel forced like it sometimes does with chick lit and it was really refreshing to read.


Everything about this Coonts novel was vibrant, loud and unique and I thoroughly enjoyed it!
Thank you to Deborah's publicist for providing our review copy and the giveaway! All opinions are our own.