Bitter Is The New Black by Jen Lancaster 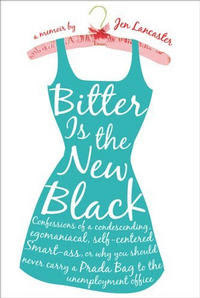 Jen Lancaster was living the sweet life-until real life kicked her to the curb.

This is the smart-mouthed, soul-searching story of a woman trying to figure out what happens next when she's gone from six figures to unemployment checks and she stops to reconsider some of the less-than-rosy attitudes and values she thought she'd never have to answer for when times were good.

Filled with caustic wit and unusual insight, it's a rollicking read as speedy and unpredictable as the trajectory of a burst balloon.


I don’t often read memoirs but I was eager to give Bitter is the new Black by Jen Lancaster a try. There’s no real reason for why I don’t usually read memoirs. I think I just tend to read more fiction because it seems to be more prevalent. I’ve always wanted to try reading a few and after a good experience with Lancaster’s, I plan on checking out a few more!

For those of you who are like me and are not memoir readers, take note that this book doesn’t really read like one. Lancaster had a great way of writing about her own life to make it sound just like a novel that’s been plotted out. You can’t plan life but the way Lancaster wrote made it seem like she had. She does note at the beginning of the book that she wrote a few things out of sequence, changed some names, characters combined, and time compressed. I can understand why she did that (to make the story move forward a little more quickly) and it didn’t bother me at all. It’s her life, after all, so she can tell her story as she wishes. At least, that’s my take on it.

I have to say, I really didn’t like her at the beginning. I also feel really bad about that because it’s not the same thing as saying you didn’t like a character. No, I am saying that Jen, a real person and the author, annoyed me. Awkward, right? I think she knew how people were going to see her and judge her and she went with it. She really changed as a person by the end of the book and that helped me like her. She had no qualms about spending a ton of money on things and was so superficial at the beginning but once life served her some hard knocks she started to realize what really matters in life.

I can’t imagine what it would be like to go through what Jen and her husband went through. You think you have everything sorted and out and then your world crumbles around you. That must have been brutal. Lancaster wrote about it in a way that gave her situation some humour but I could still tell what they struggled with and how hard it was for them.

I enjoyed reading Bitter is the New Black by Jen Lancaster. I really liked how she told her story and I will keep my eye out for some of her other books.