The Ruins of Us by Keija Parssinen 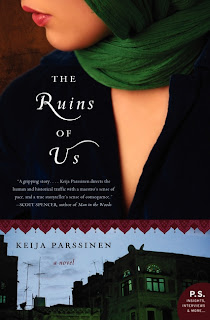 
More than two decades after moving to Saudi Arabia and marrying powerful Abdullah Baylani, American-born Rosalie learns that her husband has taken a second wife. That discovery plunges their family into chaos as Rosalie grapples with leaving Saudi Arabia, her life, and her family behind. Meanwhile, Abdullah and Rosalie’s consuming personal entanglements blind them to the crisis approaching their sixteen-year-old son, Faisal, whose deepening resentment toward their lifestyle has led to his involvement with a controversial sheikh. When Faisal makes a choice that could destroy everything his embattled family holds dear, all must confront difficult truths as they fight to preserve what remains of their world.

The Ruins of Us brought me into a world that I've often wondered about but never had the opportunity to discover. Rosalie grew up in Saudi Arabia as an American ex-pat and then later in college fell in love with Abdullah and moved back as his wife. Seems simple, right? But not really.

Saudi Arabia has much different rules for women. No driving, no being seen with men other than your husband in public, having to cover yourself. Something we're not used to and I'm not sure we could be. I wondered what it would be like to give up such essential freedoms that we are used to and this book gave me a good glimpse into what that might feel like. I'm not sure I could do it especially discovering that my husband had another wife, as was his right with the laws of the land, as Rosalie does early on in the book.

The children of this couple have grown up in Arab culture but also have been exposed to a warm and loving mothe and her American ways. However, once their son Faisal becomes older, he starts to resent his mother and what he sees as her corrupted way of life. Daughter Maryam remains loyal however, which is a big comfort to Rosalie in these trying times.

This book had me gripped from the first page, though I am not sure I could have been as patient as Rosalie was. However, having been a child in Saudi Arabia, when she married and moved there, she had an idea what she was in for. And perhaps she also felt she needed to be patient as a husband must give his wife permission to travel, so it isn't like she could just have fled home, back to the US.

The descriptions of the characters, the cities, even the fact that Saudis go to nearby Bahrain for more freedom on the weekend, which for them is different days of the week than for us, the detail this book provided made me feel like I was there, a witness to this family and their lives.

Thank you to HarperCollins Canada for our review copy! All opinions are our own.