Tell It To The Trees by Anita Rau Badami 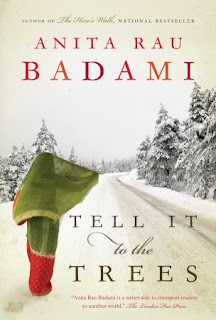 5 Star
One freezing winter morning a dead body is found in the backyard of the Dharma family’s house. It’s the body of Anu Krishnan.

For Anu, a writer seeking a secluded retreat from the city, the Dharmas’ “back-house” in the sleepy mountain town of Merrit’s Point was the ideal spot to take a year off and begin writing. She had found the Dharmas’ rental through a happy coincidence. A friend from university who had kept tabs on everyone in their graduating year – including the quiet and reserved Vikram Dharma and his first wife, Helen – sent her the listing. Anu vaguely remembered Vikram but had a strong recollection of Helen, a beautiful, vivacious, social and charming woman.

But now Vikram had a new wife, a marriage hastily arranged in India after Helen was killed in a car accident. Suman Dharma, a stark contrast to Helen, is quiet and timid. She arrived from the bustling warmth of India full of the promise of her new life – a new home, a new country and a daughter from Vikram’s first marriage. But her husband’s suspicious, controlling and angry tirades become almost a daily ritual, resigning Suman to a desolate future entangled in a marriage of fear and despair.

Suman is isolated both by the landscape and the culture, and her fortunes begin to change only when Anu arrives. A friendship begins to form between the two women as Anu becomes a frequent visitor to the house. While the children, Varsha and Hemant, are at school, Anu, Vikram’s mother, Akka, and Suman spend time sharing tea and stories.

But Anu’s arrival will change the balance of the Dharma household. Young Varsha, deeply affected by her mother’s death and desperate to keep her new family together, becomes increasingly suspicious of Anu’s relationship with her stepmother. Varsha’s singular attention to keeping her family together, and the secrets that emerge as Anu and Suman become friends, create cracks in the Dharma family that can only spell certain disaster.


Tell It To The Trees is an interesting look into the lives of an Indo-Canadian family living in a secluded community in British Columbia. I've often wondered what it would feel like to be in an arranged marriage and have to move to another country, especially one vastly different from the one you were from. This book did an incredible job portraying her isolation, loneliness and even the way she questioned her reason for being and her decisions in life.

Suman, as the mother figure in the story, tells such a tale. Having been chosen by Vikram to replace the wife who left him and to raise his daughter, Varsha, she soon beomes the mother to Hemant. Also beholden to take care of Vikram's mother, Akka, Suman only exists in their home as she cannot communicate with the outside world and is, in fact, not allowed to. Quite quickly, once Anu arrives to rent the "guest" house, we learn why.

From a controlling and often violent husband, to concern for her mother in law and a manipulative daughter, Suman feels trapped especially since she has no money and her passport, along with all of her ID, has disappeared. A tragedy takes place that threatens everything in her small world and she must decide what to do.

Children Varsha and Hemant have their own ways of dealing with their world. Their only friend being a massive tree in their backyard, it is privy to all of their secrets.

Alternating between the view points of Hemant, Varsha, Anu and Suman, Tell It To The Trees had my attention - because of the incredible way the characters all made you identify with them despite their intensely different intentions and ways of being. Despite disliking some of the characters, I also could feel their emotions and reasons behind their actions, even though what they were doing or thinking made me uncomfortable. I alternated between disbelief, shame and sadness for this family as I plowed through this fascinating novel. I'll definitely be watching for Anita Rau Badami in the future.

Thank you to Vintage Canada for our review copy. All opinions are our own.