So Far Away by Meg Mitchell Moore 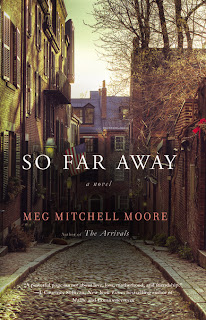 
Thirteen-year-old Natalie Gallagher is trying to escape: from her parents' ugly divorce, and from the vicious cyber-bullying of her former best friend. Adrift, confused, she is a girl trying to find her way in a world that seems to either neglect or despise her. Her salvation arrives in an unlikely form: Bridget O'Connell, an Irish maid working for a wealthy Boston family. The catch? Bridget lives only in the pages of a dusty old 1920s diary Natalie unearthed in her mother's basement. But the life she describes is as troubling - and mysterious - as the one Natalie is trying to navigate herself, almost a century later. I am writing this down because this is my story. There were only ever two people who knew my secret, and both are gone before me.

Who was Bridget, and what became of her?

Natalie escapes into the diary, eager to unlock its secrets, and reluctantly accepts the help of library archivist Kathleen Lynch, a widow with her own painful secret: she's estranged from her only daughter. Kathleen sees in Natalie traces of the daughter she has lost, and in Bridget, another spirited young woman at risk.

What could an Irish immigrant domestic servant from the 1920s teach them both? As the troubles of a very modern world close in around them, and Natalie's torments at school escalate, the faded pages of Bridget's journal unite the lonely girl and the unhappy widow - and might even change their lives forever.

I knew from the synopsis of So Far Away, written by Meg Mitchell Moore, that the novel was going to be darker than what I usually read. I was right. This wasn’t necessarily a bad thing but I wonder if I would have liked it more if this was the kind of book I generally gravitate towards.

It was quite hard to read about the bullying that Natalie was being subjected to. By no means is it the worst that anyone would have heard of but it’s still unnecessary and so cruel. I’m sure everyone can remember what it was like in high school. Maybe it was you who was at the brunt of the jokes, maybe you were the one making fun, or maybe you just let things happen without speaking up. Reading stories like this make me realize that things are so different for teenagers today yet some things are so similar. The type of bullying and the vehicle (social media, cell phones) is slightly different but the fact is kids are still being bullied. I imagine if someone reading this had a teenager, in particular a daughter, they would feel a lot more…defensive? motherly? protective?...of Natalie.  Since I don’t know anyone who would be in that kind of situation now, I didn’t have the personal connection. I’m still glad that novels like these are being written. Everyone, not just parents, need to open their eyes and realize that innocent kids, like Natalie, are being targeted for no apparent reason and that can lead to some horrible outcomes.

I think my biggest issue with this novel was that I just didn’t connect with the characters. I wanted to be more invested in their lives but I just wasn’t feeling it. I believe this is definitely a personal preference and I’m sure there are others out there who would love Natalie and Kathleen.

I found that I wasn’t very invested in the story until Natalie found Bridget’s journal. For some reason this historical aspect of the novel really interested me. It created a mystery – one that I desperately wanted to solve. In fact, by the end of the book I found that I was speed reading so I could find out how Bridget’s story would end. Then, just as we figured out her story, a few other major incidents occurred. One, which involved Natalie, was expected. Another, involving Kathleen’s friend and coworker, was a bit of a surprise (I should have seen it coming but I didn’t).

Overall, I found So Far Away to be an alright book. I didn’t love it but I didn’t dislike it either. As I’ve said, I’m sure there are readers out there who would really enjoy Meg Mitchell Moore’s novel and I encourage them to read the book and find out for themselves.

Thank you to Little Brown and Company for our review copy. All opinions are our own.