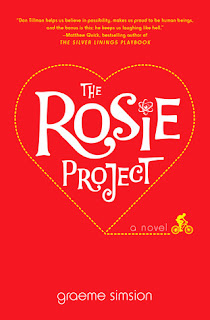 Don Tillman, professor of genetics, has never been on a second date. He is a man who can count all his friends on the fingers of one hand, whose lifelong difficulty with social rituals has convinced him that he is simply not wired for romance. So when an acquaintance informs him that he would make a “wonderful” husband, his first reaction is shock. Yet he must concede to the statistical probability that there is someone for everyone, and he embarks upon The Wife Project. In the orderly, evidence-based manner with which he approaches all things, Don sets out to find the perfect partner. She will be punctual and logical—most definitely not a barmaid, a smoker, a drinker, or a late-arriver.

Yet Rosie Jarman is all these things. She is also beguiling, fiery, intelligent—and on a quest of her own. She is looking for her biological father, a search that a certain DNA expert might be able to help her with. Don's Wife Project takes a back burner to the Father Project and an unlikely relationship blooms, forcing the scientifically minded geneticist to confront the spontaneous whirlwind that is Rosie—and the realization that love is not always what looks good on paper.

What a fabulous read this was! I worried needlessly about The Rosie Project hype and whipped through this one quickly, enjoying every word. This is an easy read that carries some interesting observations and insights and it’s quirkiness and uniqueness never seems forced.

Reading The Rosie Project felt like I was reading Sheldon Cooper’s thoughts (The Big Bang Theory) with a few differences. I enjoy Sheldon’s character, but I LOVED Don Tillman. He’s not quite as cocky about his intellect, nor does he seem to lack empathy quite as much as Sheldon clearly does. Don wants to fall in love, but he just doesn’t know how, whereas Sheldon can’t seem to be bothered by Amy Farrah Fowler. Don is kind. Sheldon has no clue.

I really enjoyed the insight into Asperger’s as I’ve watched several movies and television programs now with similarly afflicted characters. I find the mindset fascinating. Their thought processes, their lack of filter and unflinching honesty. Don is so socially challenged that you can’t help but laugh and cringe at the same time. He can’t read social cues or emotions. He’s meticulous with his schedule and rules. So it’s a surprise to all involved when he meets Rosie. She’s horrible for him on paper, being the opposite of everything he wants in a wife as outlined in his Wife Project questionnaire. And yet he’s inexplicably drawn to her. Something that all his logic defies.

What I loved most about this novel was the reasoning behind every action Don did or everything he said. It was eye opening and I was surprised at how much of it made sense. How logical it all was astounded me because for someone so different from myself, I would have thought things might not have made quite so much sense. But they did. Don’s thought processes were so logical it baffled me. And I wondered why we don’t all see the world this way or react as Don does. It made me wonder how the differences come about.

The Rosie Project developed in ways I could never have predicted, and I really enjoyed watching Don proceed with his Wife Project, and then the Rose Project. I loved Rosie’s quirky character, particularly juxtaposed against Don’s equally quirky personality. Both of their unusual ways lead to some very amusing situations and I frequently giggled out loud while reading.

I really did find The Rosie Project a feel good novel, even if at times I squirmed in my seat and felt uncomfortable at Don's unflinching honesty. Other times I found Don’s viewpoint refreshing and unique from all the other ‘looking for love’ stories I’ve read. I can’t wait to see this one made into a movie!