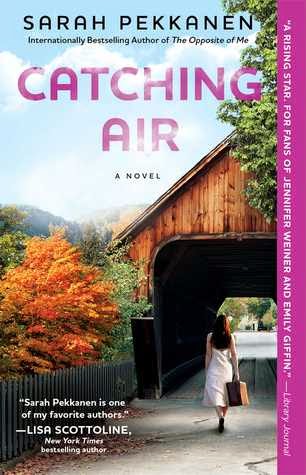 A chance to run a B&B in snowy, remote Vermont—it’s an offer Kira Danner can’t resist after six soul-crushing years of working as a lawyer in Florida. As Kira and her husband, Peter, step into a brand new life, she quells her fears about living with the B&B’s co-owners: Peter’s sexy, irresponsible brother Rand, and Rand’s wife, Alyssa…who is essentially a stranger.

For her part, Alyssa sees taking over the B&B as the latest in a string of adventures. Plus, a quiet place might help her recover from the news that she can’t bear children. But the idyllic town proves to be anything but serene: Within weeks, the sisters-in-law are scrambling to prepare for their first big booking—a winter wedding—and soon a shy, mysterious woman comes to work for them. Dawn Zukoski is hiding something; that much is clear. But what the sisters-in-law don't realize is that Dawn is also hiding from someone…

I have long been a fan of Sarah Pekkanen  so I was absolutely thrilled to have the chance to read this book as it was definitely one of the books I was most  looking forward to this year. Although I did really enjoy the characters and plotline in Catching Air (as I do with all of her writing) there was just something that I didn't care for as much as her other books and that is the reason I did not give it a 5 star review. Not to say that I didn't read it in a day (I did) and not to say that I didn't really like it (I did).

The story featured brothers Rand and Peter and their respective wives Alyssa and Kira, who were virtual strangers at the beginning of their living together. The brothers have past issues that kept coming up to the surface. And that, coupled with the tension between the women, felt a bit unbearable at times (though realistic).

Pair these often uncomfortable dynamics with a stranger who they decide to help, Dawn, and I sometimes found myself a bit unclear as to what was going on and would have to re-read a bit to refocus myself. Not something I particularly enjoy doing, though I can't say if it was more where my mind was and not necessarily the book itself.

Catching Air was interesting as it was quite unpredictable and I didn't find the characters were people that I could necessarily predict their next actions so that kept the story fresh despite the fact that I found it frustrating at times.

For fans of Sarah, you definitely won't be disappointed as it is written with her classic style.

Thank you to Washington Square Press for our review copy. All opinions are our own.