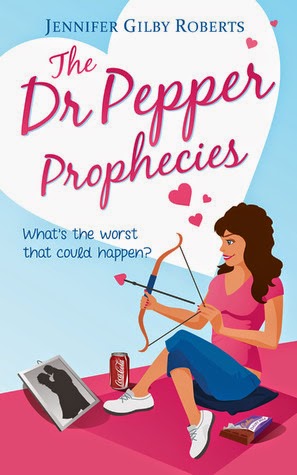 25-year-old Mel Parker has a few tiny problems:
• Her job is terrible
• She's been dumped yet again
• Her ex is now her boss
• Her parents think she's a loser compared to her perfect younger sister
• All her efforts to improve her life seem doomed to failure
• There just isn't enough chocolate in the world to make up for the above.

The one good thing in her life has always been her best friend Will, who has seen her through every crisis from lost toys to pregnancy scares. But his girlfriend (who's prettier, better-dressed, more successful and secretly evil) is determined to replace Mel as the woman in his life and how is Mel supposed to compete?

So what do you do when you've pretty much given up on your own life? Help others, of course! After all, what's the worst that can happen? Well, Mel's about to find out.

Worse still, her misguided efforts seem to be driving a wedge between her and Will. Can Mel live without her best friend? Or is he the man she loves...?

The Dr Pepper Prophecies main character has a voice crossed between Bridget Jones and Becky Bloomwood and she had me completely hooked from the first few pages. The opening chapter was hysterically funny and really set the scene well for Mel’s personality- her cringe worthy decisions in fact should make most people giggle.

Apart from the quirky voice of Mel I really enjoyed what her friends brought to the story. Roommate Beth was gentle and supportive but was obviously also keeping some things to herself (I was as surprised as Mel was to discover what they were!).  I’ve never had a roommate I didn’t know before-hand which I know can sometimes go very badly- lucky Mel had Beth who not only provided support but also cooked her meals!   Mel’s relationship with Will was pretty special too, the warmth and love between them was sweet and although their outcome isn’t going to come as a great shock I did think that the author managed to provide enough realistic doubts to make their evolvement seem natural.  I even loved Mel’s co-worker Cynthia who came from nowhere as a genuine friend too.  One of the greatest sources of silliness was due to Mel’s ex (who now happens to be her boss) and the internal dialogue over him was great- every good chick lit read needs someone we want to throw something at!

There are a couple of things I found didn’t add to the story, the use of instant messaging was a bit annoying as didn’t know why Mel’s “name” kept changing.  I also really got the idea that Mel liked chocolate….I got the idea a few too many times to the point that it became irritating to read about the obsession again and again.  These were tiny minor complaints that did take a bit away from the pace of the novel for me but didn’t affect the story line at all.

This novel isn’t going to give you thrills with its unexpected twists and turns but it gave me a happy, contended feeling at the end.  I was genuinely pleased for all the characters involved and enjoyed this read for its charm and friendliness.

Thank you to the author for our review copy. All opinions are our own.