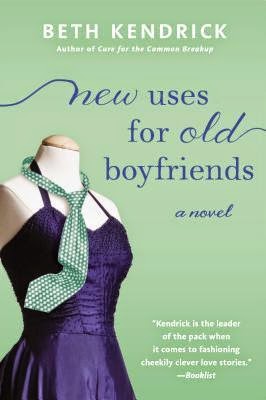 After growing up in privilege and marrying into money, Lila Alders has gotten used to the good life. But when her happily-ever-after implodes, Lila must return to Black Dog Bay, the tiny seaside town where she grew up. She’s desperate for a safe haven, but everything has changed over the past ten years. Her family’s fortune is gone—and her mother is in total denial. It’s up to Lila to take care of everything...but she can barely take care of herself.

The former golden girl of Black Dog Bay struggles to reinvent herself by opening a vintage clothing boutique. But even as Lila finds new purpose for outdated dresses and tries to reunite with her ex, she realizes that sometimes it’s too late for old dreams. She’s lost everything she thought she needed but found something—someone—she desperately wants. A boy she hardly noticed has grown up into a man she can’t forget...and a second chance has never felt so much like first love.

New Uses for Old Boyfriends was fun and though somewhat predictable I still enjoyed it! There was something endearing about Lila and her relationship with her mother. Full of improbable characters and situations, I read this one quickly.

Most of the story revolves around trying to save the family home and while I found Lila's mother frustrating at times she played her part well and did eventually pull herself out of the muck and get her head on straight. The source of the possible funds comes from mountains of couture her mother has been saving since her days as a model. I liked that we were given a bit of fashion history through the story- just enough for my unfashionable brain to handle.

There were a cast of quirky characters to help Lila and her mother move into the future and I loved that the romantic aspects of the novel were not entirely predictable. Lila's love interest in the end was a great fit and I adored his multiple personality facets- definitely not your typical leading man.

The small town lead itself to people getting into each other's business so to open a shop meant a lot of interference and opinion from others but I liked that aspect of the story. My reservations came from the fact that there may have been a few too many people involved that didn't get a conclusion of their story. The older sisters for example, who donated some garments to the store could have given much more humour to the story and the ladies in the bar could also have been made more of I think. I sometimes got a bit confused as to who was who and while the main characters were very well outlined, the sub characters were sometimes only half defined.

I enjoyed the book though and it was definitely a fun, flirty read. (And I loved the title!)

Thank you to Penguin Group for our review copy. All opinions are our own.