Save Me by Kristyn Kusek Lewis 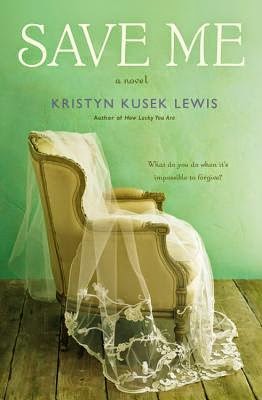 Daphne Mitchell has always believed in cause and effect, right and wrong, good and bad. The good: her dream job as a doctor; Owen, her childhood sweetheart and now husband; the beautiful farmhouse they're restoring together. In fact, most of her life has been good--until the day Owen comes home early from work to tell her he's fallen head over heels for someone else.

Unable to hate him, but also equally incapable of moving forward, Daphne's life hangs in limbo until the day Owen's new girlfriend sustains near-fatal injuries in a car accident. As Daphne becomes a pillar of support for the devastated Owen, and realizes that reconciliation may lie within her grasp, she has to find out whether forgiveness is possible and decide which path is the right one for her.

While I was reading Save Me I was surprised by the intensity of emotions that came off the page despite the easiness of the language.  I half-felt that some of the feelings came from an personal place or experience in some way and while I’ve no idea if this is true I have respect for the author’s ability to put across on paper these feelings without dragging the story down.

Much as I wanted Daphne to move on I also found myself empathising with her actions and reactions to her husband’s choices.  The honest truth is that despite what he’d done to their marriage it would be have been very hard to turn off the love she had for him and walk away completely. Her friends and family’s opinions were likely what one would expect but I respected that Daphne chose her own path through the grief.  I wonder how many people are stuck in the same sense of expectancy about their marriages as Daphne and Owen?  Lewis had one line which struck me “there is nothing pulling us forward and there hasn’t been for years, it’s like our feet are cemented in this fable of what we were supposed to be”.

The ending took me by surprise and once I got over being annoyed I actually think the author took the ending in the right direction.  It also surprised me that there was so much covered in a short period of time, I think the novel occurred over just a few weeks and a lot happened in that time in terms of personal discovery.

Despite the easy read this is a novel that made me ponder and I finished it with a sense of relief of sorts. Relief perhaps is not the right word, perhaps respect for Daphne’s decisions is a better description.

Thank you to Hachette Book Group for our review copy.  All opinions are our own.