The Girl Without A Name by Sandra Block 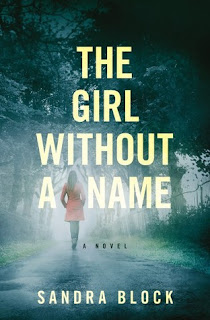 In what passes for an ordinary day in a psych ward, Dr. Zoe Goldman is stumped when a highly unusual case arrives. A young African American girl, found wandering the streets of Buffalo in a catatonic state, is brought in by police. No one has come forward to claim her, and all leads have been exhausted, so Zoe's treatment is the last hope to discover the girl's identity.

When drugs prove ineffective and medical science seems to be failing, Zoe takes matters into her own hands to track down Jane Doe's family and piece together their checkered history. As she unearths their secrets, she finds that monsters hide where they are least expected. And now she must solve the mystery before it is too late. Because someone wants to make sure this young girl never remembers.

I was initially drawn to reading this book because of an incident I recall happening in Montreal several years ago where something similar occurred. Since then, the very idea of being able to forget who you are has been something that fascinates (and terrifies) me! I cannot imagine the triggers or reasons and the brain is endlessly incredibly amazing so I couldn't help but find myself captivated from the beginning.

Zoe Goldman was an interesting and inspiring character. I know now that there are other books that feature her and I think that I would be quite interested in picking them up because I really liked how her character was developed. A strong and very intelligent woman; definitely a great role model. It isn't very often that you find a character in a book like this who is not an older man, like a police detective, so I found it refreshing that the author focused on created one like Zoe.
The story itself was extremely interesting as it had a lot more going on than just the case of Jane Doe. I know that sometimes I found it a bit difficult to focus due to the fact that the story skipped around a lot yet everything that I found Zoe getting herself involved with, whether it be other patients or her personal life seemed to have its place in the story. I suppose even some of these will be expanded on in future books.

A great mystery type almost crime novelish type book, I recommend this to anyone who likes a bit of intrigue and is fascinated by medical science.