The Opposite of Everyone by Joshilyn Jackson 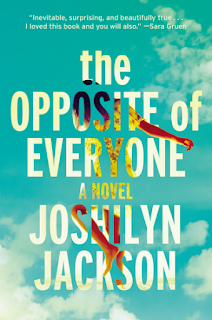 Born in Alabama, Paula Vauss spent the first decade of her life on the road with her free-spirited young mother, Kai, an itinerant storyteller who blended Hindu mythology with Southern Oral Tradition to re-invent their history as they roved. But everything, including Paula’s birthname Kali Jai, changed when she told a story of her own—one that landed Kai in prison and Paula in foster care. Separated, each holding her own secrets, the intense bond they once shared was fractured.

These days, Paula has reincarnated herself as a tough-as-nails divorce attorney with a successful practice in Atlanta. While she hasn’t seen Kai in fifteen years, she’s still making payments on that Karmic debt—until the day her last check is returned in the mail, along with a cryptic letter. “I am going on a journey, Kali. I am going back to my beginning; death is not the end. You will be the end. We will meet again, and there will be new stories. You know how Karma works.”

Then Kai’s most treasured secret literally lands on Paula’s doorstep, throwing her life into chaos and transforming her from only child to older sister. Desperate to find her mother before it’s too late, Paula sets off on a journey of discovery that will take her back to the past and into the deepest recesses of her heart. With the help of her ex-lover Birdwine, an intrepid and emotionally volatile private eye who still carries a torch for her, this brilliant woman, an expert at wrecking families, now has to figure out how to put one back together—her own.

I have always liked Joshilyn Jackson's books for their humanity and originality but this one was by far my favorite. Her characters are so unique and so broken that you cannot help but find them endearing for their unapologetic neurosis.

Paula Vauss is no exception to this rule as she has lived an interesting and even difficult life with her free spirited mother, Kai. Having been estranged for years though, Paula was not at all prepared for what turn her life was going to take and this is what the novel is all about. A story with lots of surprises, it was one that I could not have dreamed up myself and I am in awe of Joshilyn's talent, once again.

This story was like no other I have ever read, yet the central theme of family and what it means is what really appealed to me. It truly grabbed a hold and did not let go. A story with lots of lessons to impart, this book was truly a gift and one that you must read.

Thank you to William Morrow for our review copy.  All opinions are our own.