Too close to home by Susan Lewis 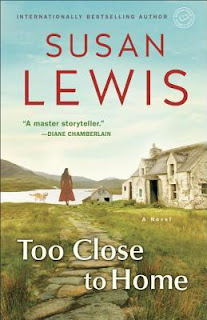 Jenna and Jack Moore have moved their family to Wales for a fresh start. For vivacious, happy-go-lucky fifteen-year-old Paige the future is full of promise.

But suddenly everything changes. Paige becomes more and more withdrawn. The closeness she once shared with her mother a distant memory.

It then becomes clear that Jack has secrets too. Preoccupied with her younger children, her husband’s fidelity and their fledgling publishing company, Jenna doesn’t realise the extent of her eldest daughter’s unhappiness until the unthinkable happens.

Susan Lewis completely took me by surprise with Too Close to Home. At first I was just happy to be enjoying the life of this family in their new country- the area and landscape jumped off the pages and I was entranced by the idyll. I was lulled into an apparently false sense of security by the description of their home and their family which was likely the same feeling Jenna had when their lives started to unravel.

The novel was intense, the characters were perfectly described and their positions were believable. I couldn’t put the book down.  I think part of it was the speed at which Paige’s situation became so catastrophic and the fact that my seven year old asked me that same day for her own phone was a smack of reality about the world we now live in.

I was with Jenna all the way through, I felt every emotion, shock and bit of resilience and would like to think I would act with the same level of dignity and poise she did.  Frankly I don’t think I would have done but I suppose with small children you can’t completely lose your cool.  I did really like though that Susan Lewis gave her moments of reality- there were monumental lows and states of utter disbelief and panic that made Jenna someone I could really relate to.

I appreciated that the author also put a fairly complicated character in for Jenna’s mother. She had some attachment issues that were interesting given that she jumped into help with the children with both feet when Jenna needed her. It was a little detail that gave the story more depth. I was also not entirely unsympathetic towards Jack. I really disliked him for his role in the unravelling of the family and his utter disregard for other people’s money but I somehow followed the train of how he got there and realised that though horrific his intentions weren’t likely unethical. I could see how Jenna was unsure of their future at first.

On the whole the novel is very well plotted with enough raw emotion to have you on the edge of your seat but at the heart it’s a novel about family and about each other.

Thank you to Random House for our review copy.  All opinions are our own.