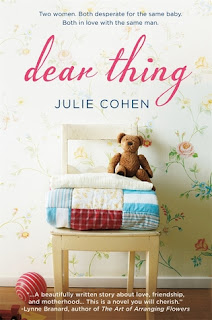 After years of watching her best friends Ben and Claire try for a baby, Romily has offered to give them the one thing that they want most.

Romily expects it will be easy to be a surrogate. She's already a single mother, and she has no desire for any more children. But Romily isn't prepared for the overwhelming feelings that have taken hold of her and which threaten to ruin her friendship with Ben and Claire-and even destroy their marriage.

Now there are three friends, two mothers and only one baby, and an impossible decision to make...

I was expecting Dear Thing to have a much sadder tone than it did and while I did feel the sadness emanating from Claire and Ben initially I was actually more buoyed up by their hopefulness during most of the story.

Their path to a family and children of their own wasn’t going according to plan, in fact they were at the end of the road in some ways and I could honestly feel both their positions through the words of Julie Cohen. The frustration from Ben and the exhaustion from Claire were both clear… So when Romily presented herself as a possible surrogate the whole novel’s feelings became more hopeful (at least from Ben) and excitedly wary from Claire.  Perhaps that was the crux of the story- there are highs and lows constantly being felt when faced with infertility, no matter what stage you’re in or what your current treatment is.

I was so hopeful for them and yet kept myself guarded throughout the story because I was worried about Romily. Not just because she was doing this thing for her friends without really considering the implications but also because she just seemed so unsettled and there was always this underlying tension between herself and Claire. I was thrilled when their friendship solidified because they both needed the support and you could tell that there could be true love between them if they would just accept each other.

The tension in the plot was intense throughout- there wasn’t a moment until the end that I was relaxed about the outcome- and even then I was surprised.  Perhaps the most grounding force in Dear Thing though was Posie, Romily’s daughter, who presented herself so honestly and with such poise that I relied on her to keep the novel on steady ground.

Dear Thing was a very well thought out novel that moved quickly with many, many emotions portrayed by the author with grace.

Thank you to St.Martin's Press for our review copy.  All opinions are our own.