That's What Friends Are For by Marcie Steele 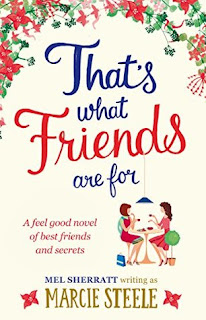 Best friends tell each other everything… right?
Sam and Louise have been best friends since they hung their coats side by side on the first day of primary school. Now in their thirties, they’re just as close, but life is a little bit more complicated…

On the outside, thirty-something Sam seems to have it all; the gorgeous husband, the beautiful home and the flourishing business. But things are not quite as rosy as they seem. So when handsome stranger, Dan, walks into her life, Sam finds his attentions hard to resist.

Louise might seem like life and soul of the party, but her outgoing exterior hides her sadness about the heartbreak in her past. She just wants someone to love – but all Louise gets left with is a quick fumble with an ex at the end of the night.

When a glamorous face from the past returns to shake things up, things get even more complicated for Sam and Louise. And just when they need each other the most, they’ve reason to wonder whether they ever really knew each other at all.

At first I had a hard time keeping the characters straight in That’s What Friends Are For because the names seemed to run together and there were a number of primary and secondary roles. I also found it tricky to place them in the town they lived in at the start- not sure quite why though?  It became much more visual to me though once we were given the scenes within the market which is when I started to connect the people, places and their relationships.

The novel has a softer image for the cover than I would have expected from the content. There are a number of challenges within the plot that certainly don’t make this novel exclusively a “light” read and while the two main women, Sam and Louise, are indeed best friends they spend much of the novel at odds with each other and are certainly not in each other’s pockets.  They both have some residual heartache that is haunting them and are not entirely comfortable with each other.  It was as if they were remaining friends out of habit rather than need.

I found Sam to be the likeable one of the two main characters. I warmed to her and her difficulties within her marriage and she generally had my empathy throughout the story. Louise, though quirky and fun, was much more frustrating. Her daughter’s needs were so far out of her spectrum that I began to actually dislike her- while I understood somewhat how she arrived at her “disinterest” in Charley, I just couldn’t accept her indifference.  She also used Matt as a babysitter without giving him any friendship (it seems) in return and this rubbed me the wrong way also quite apart from her treatment of Sam.

On the whole though I quite liked the story and did find that I enjoyed the novel!