The Year We Turned Forty by Liz Fenton & Lisa Steinke 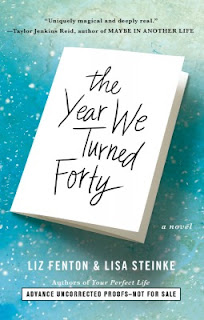 If you could repeat one year of your life, what would you do differently?
Jessie loves her son Lucas more than anything, but it tears her up inside that he was conceived in an affair that ended her marriage to a man she still loves, a man who just told her he's getting remarried. This time around, she’s determined to bury the secret of Lucas’ paternity, and to repair the fissures that sent her wandering the first time.
Gabriela regrets that she wasted her most fertile years in hot pursuit of a publishing career. Yes, she’s one of the biggest authors in the world, but maybe what she really wanted to create was a family. With a chance to do it again, she’s focused on convincing her husband, Colin, to give her the baby she desires.
Claire is the only one who has made peace with her past: her twenty-two year old daughter, Emily, is finally on track after the turmoil of adolescence, and she's recently gotten engaged, with the two carat diamond on her finger to prove it. But if she’s being honest, Claire still fantasizes about her own missed opportunities: a chance to bond with her mother before it was too late, and the possibility of preventing her daughter from years of anguish. Plus, there’s the man who got away—the man who may have been her one true love.
But it doesn’t take long for all three women to learn that re-living a life and making different decisions only leads to new problems and consequences—and that the mistakes they made may, in fact, have been the best choices of all…

Recently I read my first novel by these great writers- The Status of all Things, and I was happily attached to all the characters very quickly in that book.  The Year We Turned Forty has a similar magical aspect as in The Status of All Things- there is some sort of trigger or action that gave the characters the ability for a “re-do”.  It was a little disappointing that the same idea was taken into the next novel but as I enjoy their writing so much I quickly overlooked the similarity.

The Year We Turned Forty is compelling from a character and plot stand point.  Many of us would be interested in finding out if our lives would have been different if we’d just chosen a different path or made another choice and the women in this story are given the chance to go back and redo everything that happened to them from their 40th birthdays for a whole year.

What was interesting were the three best friends who have not only completely different lives but also have different attitudes to life.  They are so close and yet very different and I couldn’t help but wonder how they’d remained so close throughout the years. We are given a snapshot of a period in their friendship and only a few glimpses at the past that have brought us to this moment. I wish we’d had a bit more of their past to connect them in the present.

The plot was well weaved as it comprised the three different voices into a very well-paced storyline. All the characters were realistic and most importantly, for me, were the ages of the characters- they were experiencing different things than those in their 20’s – older children with teenage issues or new adult issues, the illness and loss of parents and the career versus motherhood aspect of life.

Thank you to Washington Square Press for our review copy.  All opinions are our own.