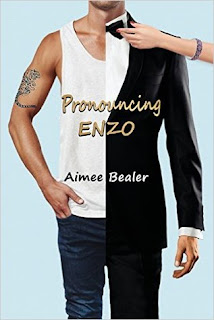 Hester Hastings is the best dialect coach in Hollywood. The hottest actors pay her top dollar to help them master accents that will wow the critics. She would never offer free lessons to an ex-con from South Central L.A. and let him live in her pool cabana…until her best friend challenges her to a crazy bet.

In only three months, Hester must transform the ex-con so he can dazzle Hollywood royalty posing as an up-and-coming British actor.

Enzo Diaz just got out of jail. He is determined to get a good job and turn his life around. But with a criminal record and an accent straight from the streets, his job prospects aren’t looking good. When Hester offers to polish his English and give him a place to stay it’s a no-brainer. Enzo is desperate for a chance at a better life.

Hester didn’t count on finding out Enzo’s rough exterior hides a heart of gold. But just when she starts to fall for him, she discovers his shocking secret.

Forget winning the bet. Does Hester have the courage to win at love?

Makeover stories are not new but there was something about Aimee Bealer’s novel Pronouncing Enzo that intrigued me. I ended up liking the book and the characters Bealer created but I was a bit disappointed because I felt that the novel could have been oh so much better.

Even though this isn’t really a very long book, it felt long. There were stretches where I just wanted to skim the pages so I could move on to the next part of the book that actually moved the story along. I found there was just a bit too much teaching Enzo dialect or manners and it got pretty boring, quickly. This is a shame because I’ve never read a book about a dialect coach before and, for the most part, I really did find it interesting.

I also didn’t love the fact that it took Hester way too long to realize that she was treating Enzo poorly and unfairly. She wasn’t mistreating him or anything like that but she was extremely judgemental and didn’t seem him as a person. This was another part I wish had been sped up because I was tired of Hester being, well, an idiot and I wanted her to see that Enzo as a good man who was doing his best because he knew this was his only shot out of a crap situation.

I really liked that the book was told from alternating perspectives. Hearing both characters’ perspectives gave the story so much more depth because I could understand their motivations for why they were acting the way they were (even if that way was ridiculous). Having Enzo’s POV also allowed Bealer to show how his speech was being altered throughout the course of the story. It was a bit annoying to read his sections at first because it was filled with slang and improper speech but as he learned Standard American English, his parts got easier to read.

Overall, Pronouncing Enzo was a good read. Aimee Bealer’s story didn’t blow me away but it was still enjoyable. I wish there had been some more editing – I felt there were too many unnecessary sections – because then I probably would have given it a higher rating. Still, the novel provided a new spin on a makeover story and is worth a read if you think it sounds interesting.

Thank you to the author for our review copy.  All opinions are our own.