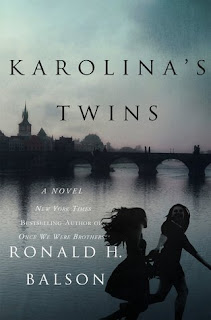 Lena Woodward, an elderly woman, enlists the help of both lawyer Catherine Lockhart and private investigator Liam Taggart to appraise the story of her harrowing past in Nazi occupied Poland. At the same time, Lena’s son Arthur presents her with a hefty lawsuit under the pretense of garnering her estate—and independence—for his own purposes. Where these stories intersect is through Lena’s dubious account of her life in war-torn Poland, and her sisterhood with a childhood friend named Karolina. Lena and Karolina struggled to live through the atrocity of the Holocaust, and at the same time harbored a courageous, yet mysterious secret of maternity that has troubled Lena throughout her adult life. In telling her story to Catherine and Liam, Lena not only exposes the realities of overcoming the horrors of the Holocaust, she also comes to terms with her own connection to her dark past.

Karolina’s Twins is a tale of survival, love, and resilience in more ways than one. As Lena recounts her story, Catherine herself also recognizes the unwavering importance of family as she prepares herself for the arrival of her unborn child. Through this association and many more, both Lena and Catherine begin to cherish the dogged ties that bind not only families and children, but the entirety of mankind.

This story is not going to pass by without an impact which one could likely predict from the synopsis. I wasn’t quite prepared though to be so touched by the current day aspect of the story as the one from the past. Though perhaps not written with the same intensity I still found the relationship between Lena and Catherine to be earnest and with true warmth. The animosity between Lena and her son also drew more depth to Lena’s history and the secret she’d been holding for so many years.  I think the present day action added to the overall plot.

The historical line of the plot was written with precision and conveyed everything you would expect from the time period. I felt clearly both the setting and the feelings of those involved. It was horrific and I suppose therefore well executed.  My feelings for Lena and Karolina bordered on maternal as I read their pain, frustration and fear regarding their situation when they were teenagers. It was a strange to feel maternal towards them as we meet Lena when she’s quite obviously not a child in the present time-line of the book.  But I was also drawn into the friendship between the girls as they tried to navigate impossible life choices later on in the plot- I was alongside them when they fell in love in inconceivable surroundings and found myself tentatively hoping that they would all survive.

The author certainly wove a story worth reading and telling- I wasn’t shocked by the secret revealed at the end but was eager to find out the outcome for Lena’s sake.

Thank you to St. Martin's Press for our review copy.  All opinions are our own.