Waiting for Ethan by Diane Barnes 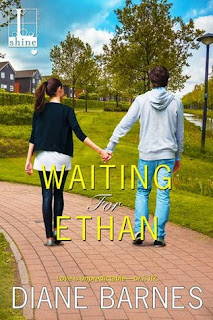 When Gina Rossi was in junior high, her best friend’s psychic grandmother got everything right—from predicting that Gina would break her arm and travel to Italy, all the way to leading police to a missing neighborhood child. The one time Gina didn’t listen to her, she almost got herself killed. So when she says that Gina will marry a man named Ethan—but she will have to wait for him—Gina believes her, and waits…

Now thirty-six, Gina’s Mr. Right is nowhere in sight—until the day she’s stranded in a snowstorm, and rescued by the last type of Ethan she expected. It’s very romantic, yet surprisingly not. This Ethan is sexy, and clearly her hero. Still, instead of her “Aha” moment, Gina’s confused. And when Ethan is happy to discover she’s single, does Gina dare tell him, It’s because I've been waiting for you? But the bigger question is, does she dare question destiny—by taking it into her own hands? And is she brave enough to handle what happens once it’s time to stop waiting—and start living?


I’m all for heroines who need to learn and grow over the course of the novel. I get that. I’m sure if someone wrote a book about me they’d sometimes think, “What are you doing that for? Are you sure about that?” It’s easy to judge and say someone, like a character in a novel, should do something when you’re not living their life. It’s hard to see past certain things…such as a prediction from someone you trust. I read this and can clearly see Gina does not belong with Ethan. But, she can’t see that. She’s desperate and is so sure this is the Ethan she’s supposed to be with. Girl, take a look at how you’re feeling and how he’s treating you. Got that? Now leave him.

All that being said, I suppose I can see why Gina is holding onto this prediction. She truly thought Ajee was always right and continued to think that because she was thinking like the child she was. We all know how important things are to kids sometimes so it makes sense that she refuses to let go of this last prediction. It’s not only a super strong belief that this will come true but also a way for her to hold onto a part of her life when she was supremely happy.

Gina was an interesting character, even if she was, at times, naïve and frustrating to me. It was easy to imagine her as a friend or co-worker, which isn’t always the case so I commend Barnes for that. I was drawn to her and maybe it’s because I liked her so much that I was so upset with how completely wrong Ethan was for her. She allowed the prediction to overpower the red flags she should have seen and that scared me a little bit. Ethan wasn’t a bad man – he just had a lot of unresolved issues that meant Gina was better off far, far away from him.

Waiting for Ethan had potential but, in the end, it kind of let me down. I did love that there was a Happily Ever After, as you’d expect from books like this, so that helped my overall feelings of the book become a little more positive. (I’m a sucker for a great HEA!) I’m sure I got too stuck on how closely Gina was holding onto Ajee’s prediction and others may not have the same issues with it that I did. If that’s your kind of story, then you should definitely check out Diane Barnes’ novel.

Thank you to the author for our review copy.  All opinions are our own.