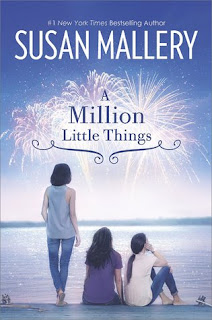 Zoe Saldivar is more than just single-she's ALONE. She recently broke up with her longtime boyfriend, she works from home and her best friend Jen is so obsessed with her baby that she has practically abandoned their friendship. The day Zoe accidentally traps herself in her attic with her hungry-looking cat, she realizes that it's up to her to stop living in isolation.

Her seemingly empty life takes a sudden turn for the complicated-her first new friend is Jen's widowed mom, Pam. The only guy to give her butterflies in a very long time is Jen's brother. And meanwhile, Pam is being very deliberately seduced by Zoe's own smooth-as-tequila father. Pam's flustered, Jen's annoyed and Zoe is beginning to think "alone" doesn't sound so bad, after all.

I entered this story laughing out loud (but trying not to) with poor Zoe stuck in her attic when her cat accidentally closes the trap door to the exit.  The image stuck with me throughout the novel as a part of Zoe’s personality. She is forced to assess her life and the fact that she’s lonely just by this small event and it propels her on a journey to change her daily and long-term existence.  She’s tired of working from home, not having a partner and becoming more distant from her friends who are moving on.

While Zoe’s journey is fairly straightforward (barring exes who won’t go away, a slightly out-there father and a tricky new love interest) but this first scene really made me like her.  Zoe’s quest to balance her life forces her to try and get back into the life of her best friend.  Jen has a baby now and has become more than obsessed with him. At first you want to shake her and make her see sense but it soon becomes apparent that there is more to her focus, there are more difficult issues for Jen to deal with that are causing her fixate on her son.

Meanwhile Zoe reconnects with Jen’s mother and finds in her a maternal figure that she is missing after her own mother’s death.  It hasn’t been long since Zoe’s mother passed and one of the things she’s searching for is a person to rely on.  The connection between Zoe and Pam is so sweet and I was really pleased for Zoe to find someone who could help her gently on her voyage.  However, their friendship adds complications to the bond between Jen and Zoe and Jen and her mother.  To make matters more complicated Zoe finds herself very much attracted to Pam’s son (Jen’s brother) and Pam ends up dating Zoe’s father.  Confused?  Yes, the novel is tangled, however none of it is complicated when you’re reading it!  All seems to slot perfectly into place in the end and the title, A Millions Little Things, seems fitting when you’re putting all these relationships together.

I really enjoyed the novel, there are some important issues addressed with Jen and some self-assessments that made me think with all the other characters.  A great read!

Thank you to Mira Books for our review copy.  All opinions are our own.