The Last Summer at Chelsea Beach by Pam Jenoff 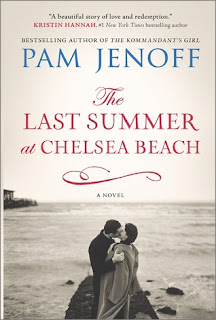 Young Adelia Monteforte flees fascist Italy for America, where she is whisked away to the shore by her well-meaning aunt and uncle. Here, she meets and falls for Charlie Connally, the eldest of the four Irish-Catholic boys next door. But all hopes for a future together are soon throttled by the war and a tragedy that hits much closer to home.

Grief-stricken, Addie flees—first to Washington and then to war-torn London—and finds a position at a prestigious newspaper, as well as a chance to redeem lost time, lost family…and lost love. But the past always nips at her heels, demanding to be reckoned with. And in a final, fateful choice, Addie discovers that the way home may be a path she never suspected.

I was immersed instantly into Addie’s story as she arrived in America from Italy during WW2.  She’s just a child when her parents send her to her uncle to save her from the war they are living through at home and she’s obviously confused and worried about them as well as being unsure about her new life.  Finding the loud, happy family of boys next door to her aunt and uncle’s holiday home at the beach adds a level of excitement to her worry and helps to make her feel settled.

Following their return to the city after that first summer there is a natural relationship that forms between Addie and each of the brothers. Quickly though, things seem to turn for the worse and the family is devastated by the loss of one of their children- the Connally’s and Addie’s lives change irrevocably.

Addie is lost and spends the next period of her life running away when anything starts to feel like commitment. I just didn’t get the impression that she was all that invested in anything she was pursuing (except perhaps helping the displaced children she meets in London). The men seemed to feel love and passion but Addie just appeared to drift along beside them.
I was also so disappointed that her aunt and uncle didn’t have more impact on her upbringing. Though perhaps a bit strict and unused to raising children they obviously loved her and she seemed determined to turn her back on them which didn’t fit with the way she was raised by her own mother.

On the whole I enjoyed the book while I was reading it but part three really did add a twist that I wasn’t expecting and made me question how I’d viewed Addie all along.

Thank you to Harlequin/Harper Collins for our review copy.  All opinions are our own.