The lost daughter of liverpool by Pam Howes 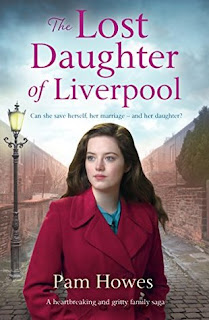 Can she save herself, her marriage – and her daughter?
It’s 1946 and the war is over. In Liverpool, the blackout blinds may be coming down, but one family is about to face devastating misfortune…

Dora Evans is finally marrying the love of her life, Joe Rodgers, and her dreams of opening a dressmaking business look as if they might come true. With twin daughters on the way, Dora has everything she’s ever wanted.

But then tragedy strikes: one of Dora’s babies dies in infancy, and a catastrophic fire changes their lives forever. Dora is consumed with grief, struggling to get through each day and Joe is suddenly distant, finding solace in his colleague, Ivy.

With Ivy watching and scheming, and Dora battling against her own demons, can she keep her family together?

This book reminded me of an author I haven't read in awhile called Pamela Evans who mainly focused her stories in London. I liked the Liverpool focus as I have a family link to the city. Though the era of the novel is post world War two I still felt the same warmth of the people of the area that I have when I visit today.

I actually was surprised that though the story has a gentleness in its telling there are is an underlying agenda regarding postpartum depression. I was surprised by this tact and the author did a wonderful job of exploring the issues while remaining in the time period. Dora was very lucky I should think to have an empathetic doctor who recognised that her recovery would be best accomplished with people who loved her rather than in an institution- which was the norm at the time.

I was really impressed with the way the characters were all described, their lives explored and developed before the depression which arrived after birth.  Dora’s sewing business was also well placed for the time period and the social standing of the family- it was quite fascinating to see her determination to make her own business work.

There’s a lot more to this novel than you would expect and I certainly don’t want to give anything away but I will say that I’m very keen to find out what happens the next parts of the trilogy!

Thank you to Bookouture for our review copy. All opinions are our own.