After the fall by Julie Cohen 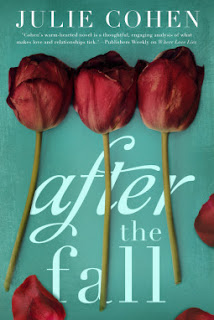 When an unfortunate accident forces Honor back into the lives of her widowed daughter-in-law, Jo, and her only granddaughter, Lydia, she cannot wait to be well enough to get back to her own home. However, the longer she stays with Jo and Lydia, the more they start to feel like a real family. But each of the three women is keeping secrets from the others that threaten to destroy the lives they’ve come to know.

Honor’s secret threatens to rob her of the independence she’s guarded ferociously for eighty years.

Jo’s secret could destroy the “normal” family life she’s fought so hard to build and maintain.

Lydia’s secret could bring her love―or the loss of everything that matters most to her.

One summer’s day, grandmother, mother and daughter’s secrets will be forced out in the open in a single dramatic moment that leaves them all asking: is there such a thing as second chances?

After the fall is a book full of emotion from every direction.  Because much of the feeling of loss wasn’t explained fully until the end of the book, I spent a lot of time speculating on what had happened in their mutual past.  It shines a light on today’s society with the sense of detachment we now have from our immediate family and the isolation we can feel by living via social media rather than in person.

Honor lives alone and is determined to remain independent but a serious fall forces her to have to accept help.   It appears she doesn’t have anyone to turn to except her daughter-in- law and that’s only because the hospital calls her next of kin on her behalf.  Honor is a difficult person to unravel and the reader is immediately curious because Jo is the in-law and we don’t know what happened to Honor’s child?

Jo’s swamped with two small children, a teenager and a frustrating ex-husband but the notion of leaving Honor to fend for herself isn’t an option.  There’s so much tension between Honor and Jo though that there’s whole sections of the book where you’re feeling edgy because you want them to sort out their issues...

Lydia, Jo’s teenage daughter, is navigating her first feelings of love and she’s not sure she can share how she’s feeling with anyone.  I was really invested in her story andI was thrilled to have her inching closer to her grandmother, to have that bond starting to form because her social life started to spiral rapidly out of control and I desperately wanted someone to catch on...

Overall this book will have you look more closely at the way we relate to each other and how much listening we really do.  I hope it’s given me some insight into how teenagers (particularly daughters) can hide things that are tearing them up inside and to try to be a better communicator.

Thank you to St.Martin's Press for our review copy.  All opinions are our own.