The Broken Girls by Simone St.James 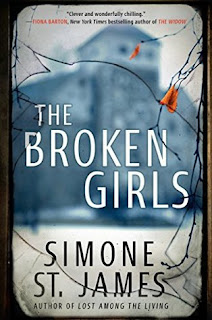 Vermont, 1950. There's a place for the girls whom no one wants--the troublemakers, the illegitimate, the too smart for their own good. It's called Idlewild Hall. And in the small town where it's located, there are rumors that the boarding school is haunted. Four roommates bond over their whispered fears, their budding friendship blossoming--until one of them mysteriously disappears. . . .

Vermont, 2014. As much as she's tried, journalist Fiona Sheridan cannot stop revisiting the events surrounding her older sister's death. Twenty years ago, her body was found lying in the overgrown fields near the ruins of Idlewild Hall. And though her sister's boyfriend was tried and convicted of murder, Fiona can't shake the suspicion that something was never right about the case.

When Fiona discovers that Idlewild Hall is being restored by an anonymous benefactor, she decides to write a story about it. But a shocking discovery during the renovations will link the loss of her sister to secrets that were meant to stay hidden in the past--and a voice that won't be silenced. . . .

I love books that are written with a story told alternating between past and present as I find it helps give a complete picture of a story- The Broken Girls was written in that style. I also have a special love of Vermont having been there many times and luckily counting many people there as friends.

I can definitely picture the rural fields and school as part of the picture that was painted in this story and very much liked the creepy tale woven by Simone St. James. It still shocks me though to realize that people really did ostracize others for so many reasons back in the not so distant past and the girls who loved at Idlewild Hall were no exception. I felt so sad for them and the lives they had to live because of society and felt a particular sadness for Fiona as her demons from the past were certainly continuing to haunt her.

A story that any fan of suspense will love, I look forward to discovering more of this author`s writing  especially as I understand she is a fellow Canadian.