The Undercover Mother by Emma Robinson 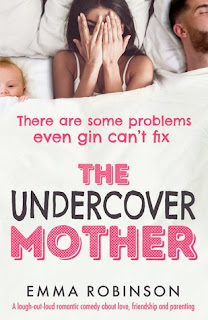 Jenny has too much on her plate: literally – she’s only pregnant with one child but she’s already eating for three. Not to mention trying to juggle her future life with a baby, a nightmare boss, a know-it-all sister, and a bizarrely laid back husband.
She used to be famous for her ‘Single Girl About Town’ journalism. But not only is she bored of parties, she also hasn’t been single for years, and is now 8½ months pregnant.
So when her boss hands her column to a younger colleague, Jenny panics and proposes instead writing about being a clueless new mum. Surely people will find her new friendship group fascinating? Even if the only thing they have in common is that they all had sex around the same time 9 months ago...
Like – what’s the deal with scary Gail’s mystery husband? How is posh mum Antonia already out drinking when Jenny can barely make a cup of tea? Why isn’t sweet-natured Ruth answering any phone calls?

And if her readers aren’t quite hooked yet, maybe Jenny will just have to be more liberal with the truth. After all, none of the other mums will read it… will they?

This book was definitely funny, laugh out loud kind of funny at times and laughing/crying in commiseration at times too.  I have conveniently forgotten how utterly confusing that first year is and this book does indeed cover it.  However it's not really about motherhood as much as it's about the bond of motherhood-between women. How the very fact that you have birth around the same time as someone else automatically links you in this same period of confusion.

I liked the novel because of the women and how they were all different types of mothers.  What I didn't quite get on board with was the rest of the plot. I found Jenny's job quest a bit frustrating and her obsession to remain on the magazine in the same capacity a bit far fetched.  While I could appreciate that she wasn't quite ready to give up her old self she didn't seem to have any comprehension of how much things were really going to change having had a child.  I also wish that the blog she had been writing had been more humorous and heartfelt rather than looking for the sensationalistic approach.  I think that Jenny herself eventually realized that her approach wasn't quite right but that may be me projecting my age on her new mum self.

The author though did keep me engaged and I enjoyed the writing and all the characters.  I was just hoping for a tiny bit more.  But don't let me put you off the funny parts are really funny and the author's real-life blog is fantastic!