The Secrets We Keep by Kate Hewitt 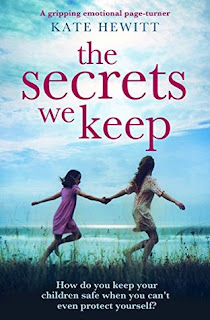 When Tessa arrives at the little house by the lake with her two children Ben and Katherine, it is an escape. For all of them. Never mind that the rental house is a bit small – it’s theirs for the summer. A place to hide…

Their isolation is disrupted when they meet the family from the big house next door. Three children Charlotte, Zoe and Max and their glamorous mother Rebecca – who seems absolutely determined to invite Tessa in to their lives.

But Rebecca is harbouring a dark secret of her own. One that will put not only her family at risk, but Tessa’s too. And when she discovers she has no option but to leave her children for several weeks, Tessa feels like the only person she can trust.

Suddenly Tessa finds herself living a life she could only have dreamed of. Wealth, a large brood of children, and Rebecca’s handsome husband Josh visiting at weekends.

But even as powerful bonds are forming between them, secrets have a way of catching up with people. And as the summer comes to an end, who will learn to love again and who will risk losing everything?

The introduction of Tessa and her children was so well done that I could picture the kids and their moods and even the faces they were making. They were so well painted I was entirely hooked and emotionally drawn into their situation.    The picture isn't filled in though and the gaps take the entire novel to slip into place.  That could be a little frustrating at times mostly because motive for certain actions are unclear for so long.  That is how we do suspense though!

Tessa is an interesting juxtaposition of confident and unsure.   She is intimidated by her seemingly perfect neighbour Rebecca and yet finds herself running two households and all the kids lives with ease when she is needed.

The two women become really close... to be honest though I was never really comfortable with their relationship.  It may have felt more authentic from the inside but from the outside it made me nervous.  And there was reason to feel that way... but I'm not going to give it away.

The novel is slow burn with cautious intensity and I loved the intrigue and the bonds between women and mothers.   I wish I could have known what happened further down the line on their lives.

I loved this book by Kate Hewitt but wished there had been a few more ends tied up! 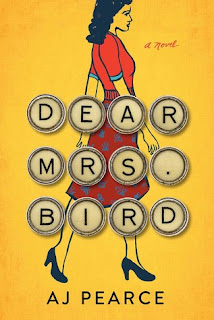 London 1940, bombs are falling. Emmy Lake is Doing Her Bit for the war effort, volunteering as a telephone operator with the Auxiliary Fire Services. When Emmy sees an advertisement for a job at the London Evening Chronicle, her dreams of becoming a Lady War Correspondent seem suddenly achievable. But the job turns out to be typist to the fierce and renowned advice columnist, Henrietta Bird. Emmy is disappointed, but gamely bucks up and buckles down.

Mrs Bird is very clear: Any letters containing Unpleasantness—must go straight in the bin. But when Emmy reads poignant letters from women who are lonely, may have Gone Too Far with the wrong men and found themselves in trouble, or who can’t bear to let their children be evacuated, she is unable to resist responding. As the German planes make their nightly raids, and London picks up the smoldering pieces each morning, Emmy secretly begins to write letters back to the women of all ages who have spilled out their troubles.

I loved this one!   At one point my ereader stopped working and I couldn't get it to reboot - I was so frustrated I had to procure myself a new one asap.

The story has a modern feel for a historical novel for me- it felt like the plot moved quickly and was easily read but was firmly set during WWI.  I immediately loved Emmy, her energy, her optimism and her determination.  A force to be reckoned with she did her best to make the best of being Mrs.Bird despite not really feeling the part. Unfortunately, her desire to help didn't entirely work out and I felt for her when her optimism started to dwindle and she questioned herself.  Apart from the writing job she also juggles a voluntary position for the war effort and some lovely friends who added a lot to her personality.

The appeal to this book for me wasn't just the job but the whole package.  The development of characters and storyline didn't miss a beat and it was a good perspective on women in the workforce during the period that I hadn't investigated before.

Thank you to Simon & Schuster Canada for our review copy.  All opinions are our own.