The Mother-in-Law by Sally Hepworth 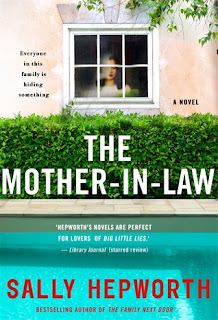 From the moment Lucy met Diana, she was kept at arm's length. Diana is exquisitely polite, but Lucy knows, even after marrying Oliver, that they'll never have the closeness she'd been hoping for.

But who could fault Diana? She was a pillar of the community, an advocate for social justice, the matriarch of a loving family. Lucy had wanted so much to please her new mother-in-law.

That was ten years ago. Now, Diana has been found dead, leaving a suicide note. But the autopsy reveals evidence of suffocation. And everyone in the family is hiding something...

I am a big fan of Sally Hepworth. It began with The Secrets of Midwives and I've read everything she's written since.  I like that she puts challenges into relationships that seem like they should be fairly simple to solve- but never are.

I enjoyed The Mother in Law simply because I was still doubting my assumptions right until the very end.  Though one could assume certain things is valid, but that didn't take away from the suspense for me.

Poor Lucy is so desperate for a mother figure and I felt so much empathy for her because Diana is very much surface supportive of the relationship even though she obviously is devoted to Oliver - in a slightly distant sort of way.  The frustrating thing is that in hearing both sides there are missteps and misunderstandings that could likely have been cleared up if Oliver had sat them down or they'd gone to some therapy on how to communicate.  Diana obviously is not an unkind person, she devotes much of her life to helping others.  But she's tough on her daughter as well as Lucy. The mother daughter bond seemed to be fractured for her also.

Once you get into the history of Diana there is a lot of clarity about her upbringing that helps to show us why she is the way she is but it doesn't help make the end any better, except maybe for the reader!

On the whole the suspense was there for this book but I did find it more frustrating that their problems could have been solved with a bit more listening- hindsight indeed.  I enjoyed it but it's not my favourite from this author.