Where the Crawdads Sing by Delia Owens

For years, rumors of the “Marsh Girl” have haunted Barkley Cove, a quiet town on the North Carolina coast. So in late 1969, when handsome Chase Andrews is found dead, the locals immediately suspect Kya Clark, the so-called Marsh Girl. But Kya is not what they say. Sensitive and intelligent, she has survived for years alone in the marsh that she calls home, finding friends in the gulls and lessons in the sand. Then the time comes when she yearns to be touched and loved. When two young men from town become intrigued by her wild beauty, Kya opens herself to a new life–until the unthinkable happens.

I had been hearing a lot of praise about this novel and thankfully it did not disappoint. Where the Crawdads Sing is set in Barkley Cove, a small quiet town on the North Carolina coast. The protagonist is Kya Clark, known by the townspeople as “Marsh Girl”. When she is six years old her Mother walks away and slowly the rest of her family leaves until she is left to fend for herself.

There are several heartbreaking moments in this novel as Kya deals with being abandoned by her family, though the author does a good job of exploring the reasons behind this abandonment. Kya is a refreshingly strong female protagonist that even when being stubborn you find yourself always rooting for.

I found myself completely immersed in the descriptive nature writing in this novel with elegant prose and sweeping descriptions of the marsh and its wildlife. It felt fitting in light of the current climate crisis to have a main character that is literally raised by Mother Nature, and who is deeply grateful for her surrounding environment. Parallel to Kya's story of survival is also a mystery around the death of a town legend and golden boy Chase Andrews.  I don't know that this novel would satisfy hardcore mystery fans, it is definitely a great combination of mystery, nature writing and historical fiction. 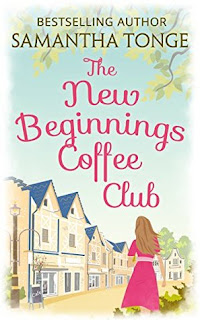 Everyone deserves a second chance…don’t they?
Jenny Masters finds herself living the modern dream. Wife to a millionaire, living in a mansion and mother to Kardashian-obsessed ten-year-old April, there isn’t anything missing. Until, her whole world comes crashing down, forcing Jenny and April to leave behind their glittering life and start over with nothing.

With village gossip following her wherever she goes, she finds refuge and a job in the new coffee shop in town. As the days pass Jenny fears she doesn’t have what it takes to pick herself back up and give April the life she always wanted to. But with the help of enigmatic new boss Noah, and housemate Elle, Jenny realises it’s never too late to become the woman life really intended you to be!

This is a sweet novel full of things to restore feelings of friendship and faith in humanity.   I appreciated though that Jenny's daughter April was a typically self centered pre-teen with attitude I could recognize.  There was certainly an element of reality injected into this novel mingled with the loveliness.   A good start was Jenny's decision to get herself a new life as soon as she realized that she could not salvage her marriage.  I adored that she didn't feel her new abode was beneath her recent status nor did she shy away from hard work, making friends with people she would not have known in her prior life and she didn't give her daughter any leeway in getting on with it.

I often find myself a bit annoyed with leading ladies in stories of this nature but Jenny was different and I loved her and her colleagues.  They were the best kind of people and she was so lucky to find them. I was also pleased that April wasn't left out of the story line, we are given her story even though the focus was on Jenny and I gleaned a little insight into my own children by reading about her.

A good story with some different takes and I enjoyed it.

No One Ever Asked by Katie Ganshert 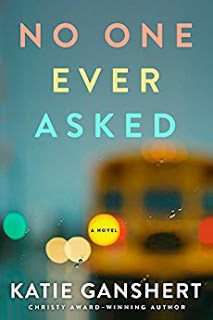 When an impoverished school district loses its accreditation and the affluent community of Crystal Ridge has no choice but to open their school doors, the lives of three very different women converge: Camille Gray--the wife of an executive, mother of three, long-standing PTA chairwoman and champion fundraiser--faced with a shocking discovery that threatens to tear her picture-perfect world apart at the seams. Jen Covington, the career nurse whose long, painful journey to motherhood finally resulted in adoption but she is struggling with a happily-ever-after so much harder than she anticipated. Twenty-two-year-old Anaya Jones--the first woman in her family to graduate college and a brand new teacher at Crystal Ridge's top elementary school, unprepared for the powder-keg situation she's stepped into. Tensions rise within and without, culminating in an unforeseen event that impacts them all.

No one ever asked by Katie Ganshert was a big surprised to me.  Not only was I fully engrossed by the story but I was impressed with the tackling of such diverse points of view.  This is my first read of this author and I was impressed.

The three women come from different backgrounds and face different obstacles but all are affected by the same district reorganization of their schooling system. It was a tough subject to tackle and I think Ganshert did it with grace.  I'm not completely sure all voices could be considered one hundred percent authentic but I found each one fascinating as I'm not in a position to relate to any of them.
I tend to be inclined to give anyone the benefit of the doubt but even I had a lot of trouble warming to Camille.  She epitomized everything that made me and still makes me nervous about the "cool" kids.  The teacher, Miss.Jones, had me much more comfortable though I am not of the same background.  I loved her attitude, her empathy towards all her students and her strength.  And I related most to Jen who had finally realized her dream of being a mother and yet found herself floundering.   The three  stories overlapped but not in a way that seemed unnatural.

My only issue with the book was the "climax" which I found a bit contrived and obvious.  I wish it had been a more subtle event.

The novel is worth reading for it's examination of the three very different lives which are tackled with great genuineness.

Thank you to Waterbook for our review copy.  All opinions are our own. 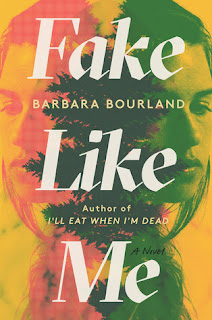 After a fire decimates her studio, including the seven billboard-size paintings for her next show, a young, no-name painter is left with an impossible task: recreate her art in three months-or ruin her fledgling career.

Homeless and desperate, she flees to an exclusive retreat in upstate New York famous for its outrageous revelries and glamorous artists. And notorious as the place where brilliant young artist Carey Logan-one of her idols-drowned in the lake.

But when she arrives, the retreat is a ghost of its former self. No one shares their work. No parties light up the deck. No one speaks of Carey, though her death haunts the cabins and the black lake, lurking beneath the surface like a shipwreck. As the young painter works obsessively in Carey's former studio, uncovers strange secrets and starts to fall--hard and fast--for Carey's mysterious boyfriend, it's as if she's taking her place.

But one thought shadows her every move: What really happened to Carey Logan?

Another thriller that gripped my attention, I quite enjoyed Fake Like Me, despite not being into the art scene. I feel like if I was, I would have enjoyed it even more because it would have had that much more meaning.

The book had a lot of things that I wondered about, like were they things that were just added to the story, or were they actual facts? It did somewhat add to the overall mystery of the plot and I suspect that they had a basis in reality for those immersed in that scene.

The title could not have been more apt; but, as I think it over, it meant so many things in the book! A big, recurring theme was the authenticity of art and what that means. I can say I certainly learned a lot as far as those things go and how they are viewed.

An eye opening novel that taught me many things, Fake Like Me also surprised me in many ways, including how very much things can be changed to appear differently and the long lasting and numerous effects.