A Scattered Life by Karen McQuestion 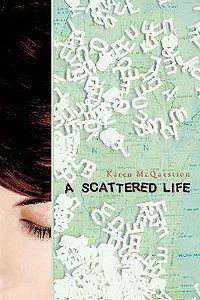 Skyla Plinka has found security in her reliable husband, Thomas, and as they live in rural Wisconsin and raise their six year old daughter, Skyla starts to feel restless. With a budding friendship in her new neighbour, Roxanne, whose life is in constant disarray, Skyla starts to yearn for more and begins spreading her wings, much to the dismay of her over bearing mother in law, Audrey, who feels left out of her son's life. Three very different women narrate this tale, each with their own lessons on love to learn.

A Scattered Life was a pleasant, easy read, but unfortunately it fell a bit flat for me. When we were contacted about reviewing this novel, I was wary with it being previously self-published (it is now available in print through Amazon Encore). I was pleasantly surprised to find the writing itself was a refreshing change from much of the self published works I've attempted and struggled to read (and I apologize to the self publishers out there and wish you all success, but I have a hard time reading past the first few pages most of the time and don't want to fling around negative reviews, which is why we don't review them). With A Scattered Life, although I found the writing easy to read and thought it flowed smoothly, there were a few plot and character issues that had me less connected with this work than I wanted to be.

I didn't find as much depth to the characters as I would have liked and they all came across as one dimensional to me. Skyla herself seemed a bit wooden and although searching for more in life, I don't know if she really found it. Her husband came across as controlling and I couldn't find any other way to see him. With Skyla figuring out her life, I wanted her to see more of this in him and spread her wings further, but never saw much of a change with their relationship which I found really disappointing. I liked Audrey's story and it was interesting to see an overbearing mother in law's side of the story instead of just from the daughter in law's perspective. I thought her transformation was slightly more realistic somehow. Maybe because I just had more of a grasp on her character or that I really felt sorry for her, but even with seeing more of a change, I would have liked to see her take some more action towards the end.

The story seemed to wrap up with a twist I wasn't expecting which was a pleasant surprise, but I found the ending so rushed that it just fizzled out, leaving a few strings dangling that were never followed up on. With Roxanne having such a pivotal role in the climax, I would have appreciated a passage from her perspective as well as Audrey at the end of the novel, but all we see is Skyla's perspective.

All in all, I didn't mind A Scattered Life, and can see how McQuestion has become a self publishing success and might very well read another.


Kathryn - 3 Star
A Scattered Life for me was very much like the title in that my feelings about the characters and the plot were quite scattered- I would therefore like to assume that I got out of it what the author had hopefully intended.
My gut feeling tells me that I liked the main character, Skyla, but felt like we were given a mere hint of her family and her past at the onset and then nothing for the rest of the story. This is one of the complaints Skyla’s mother in law seems to have- there’s just not enough family there to make her have roots and yet she settles almost without question into marriage and motherhood- as if she was looking for someone to take care of her.
I think that this was meant to create an air of mystery surrounding Skyla but instead it left me frustrated as the Skyla from the opening chapters just got swallowed up by this boring and conventional husband. Occasionally we are given a glimpse of a fun loving man -but it’s taken away again.  Having said this I don’t think I ever felt him to be controlling in a problematic way- just boring and far too concerned about making sure his family gave the right impression to the outside world.  Their marriage just seemed a strange match to me.
The relationship between Skyla and Roxanne is my centre of the story and Roxanne’s kids made me tired just reading about them.  I think that this story line is what made me keep turning the pages and it is well worth reading this novel just for the wonderful way in that the author develops the friendship between these two women.