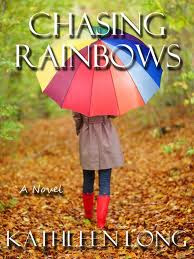 Bernadette Murphy likes her life. Really, she does. What’s wrong with carrying around an extra ten pounds from fertility treatments? Or having your dog kicked out of obedience school? Again?

What’s that saying about the devil you know? For Bernie, it’s the devil she never expected that changes everything.

Her father’s sudden death leaves a gaping void in her life and is one in a series of events that rock her world. Her husband leaves for another woman, and her best friend announces an unplanned pregnancy at the age of forty-one. Bernie’s behavior goes from acting out to out of hand, and she finds herself in trouble at home, out of work and banned from the mall after a confrontation at the cosmetic counter.

When her mother hands over her father’s book of cryptograms, Bernie realizes his encoded lessons in living might be exactly what she needs to survive. From dealing with her family’s grief to bonding with her best friend’s thirteen-year-old daughter, from dieting and dating to mindless almost-sex with the landscaper, Bernie discovers what her father always knew.

In life, you either choose to sing a rainbow, or you don’t.

For Bernie, the singing is about to begin.

Written impeccably, with perfect pace and pitch, wonderful characters and a plot to sink your teeth into, Chasing Rainbows tossed all presumptions of self published novels I had off a high rise building.

Chasing Rainbows is definitely a heavy read, but not too over powering that I wanted to put it down. It was the opposite in fact –I couldn’t stop reading. We meet Bernie as she’s dealing with the recent loss of her father just weeks after her husband left her and sprinkle in a devastating loss from years prior that she hadn’t yet dealt with, Bernie is in for a rough ride. And so is the reader.

Bernie’s loss was palpable. Not many novels evoke tears from me within the first fifty pages, but Chasing Rainbows accomplished this, several times. There was enough humour to balance out the anguish though and anyone who has suffered a loss will be able to relate to this novel. As will anyone that has been stuck in a rut, been pissed off with life and wanted to lash out or has suffered with lapses in self esteem, been crippled with self doubt, made a mistake or felt fearful of change or life. There is something in Bernie and her situation that most of us will be able relate to.

As Bernie binges, lashes out and alienates loved ones, toppling her own deck of cards, her fear of life strangles any living she ought to be doing. She is not perfect and is quite self deprecating at times and cannot see how to emerge from her despair and some of the unfavourable reviews I browsed at Amazon seemed not to appreciate this. Maybe they’ve never suffered loss or never tortured themselves by settling on the couch with tear jerker movies and various pints of ice cream and chocolate. I enjoyed watching Bernie crawl back up and loved watching her progress and enjoyed the influencing characters that surrounded her.

This book surprised me multiple times and I was never certain what life would throw Bernie’s way. There were amusing bits, heart wrenching moments and characters that I adored from her best friend and her 'niece' to her mother and brother, although I wish the later two had more scenes.

I really enjoyed the quotes at the end of each chapter which were thought provoking and inspirational, and although I never really got into the cryptograms, I appreciated how they lead to the quotes.

I will definitely be picking up Kathleen Long in the future.

Thank you to CLP Blog Tours for the opportunity for us to be a part of Kathleen's Blog Tour. All opinions are our own.