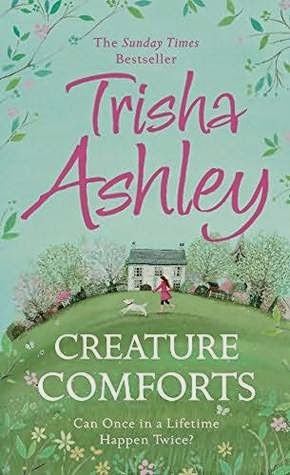 Izzy has broken off her engagement to her feckless fiancée Kieran and returned to her childhood home – the sleepy village of Halfhidden.

She soon realizes that life in the village is anything but peaceful – for one thing she’s living with her mad aunt Debo and her pack of dogs, and for another, Izzy has a lot of unanswered questions.

When she was a teenager, Izzy was involved in a terrible accident, involving various inhabitants of Halfhidden. As she sets out to discover what actually happened on the night of the accident, she realizes that her painful past is actually standing in the way of her future happiness. So when a handsome stranger comes to Halfhidden will she let love back into her life?

Creature Comforts was such a simple title but I found the novel to be very complicated. There were, unfortunately, a vast number of characters and almost every one of them was starting their own business or changing jobs/romantic partners and they all had a parent/aunt/guardian/mad uncle that was mixed up in our protagonist’s search or one of her friends’ lives.  At the end of the novel I still didn’t know who everyone was and had no clue which business title belonged to which character. I felt almost as if I’d been dropped into an episode of something already in progress and I was struggling to catch up.

Because of the confusing nature of the narrative I struggled to get into the story and had a hard time connecting with Izzy.  I understood that she had returned to her village of Halfhidden to get the whole story about an accident she had been involved in in her teens.  It seemed really peculiar to me that, now in her mid-thirties, was the first time she was attempting to put the pieces together of that night.  It was explained that she had spent the intervening years putting her life together but I never really got the feeling that the accident was interfering in her current life-plan?  It was almost as if there were two stories in Creature Comforts and neither one was focussed on properly.  One about Izzy’s search for the truth- which could have made a great story and the other about Izzy returning to her home town- having left her fiancée, to start a new business.

Having said all that, there were several interesting villagers that kept me entertained (Debo and Cam for instance) and I liked the village of Halfhidden quite a lot also!

I am obviously in the minority in my feelings about this book- most people seemed to enjoy it immensely and weren’t nearly as befuddled as I was.  I’ve also read novels by Trisha Ashley before and loved them so I’m going to put this in the “huh?” pile and move on!

Thank you to Harper Collins UK for our review copy.  All opinions are our own.