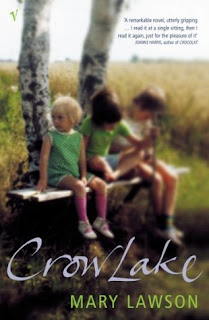 Here is a gorgeous, slowburning story of families growing up and tearing each other apart in rural Northern Ontario, where tragedy and hardship are mirrored in the landscape.

Centre stage are the Morrisons whose tragedy is insidious and divisive. Orphaned young, Kate Morrison was her older brother Matt's protegee, her curious fascination for pond-life fed by his passionate interest in the natural world. Now a zoologist, she can identify organisms under a microscope, but seems blind to the tragedy of her own emotional life. She thinks she's outgrown her family, who were once her entire world - but she can't seem to outgrow her childhood or lighten the weight of their mutual past.

I was loaned this novel to read on holiday and I was fascinated from the first pages.  Initially I was inspired by the fact that it was set in my own country and that adult Kate was about my age.  That's where the similarities ended as she was raised in northern Ontario amongst farmland and a bustling communit-centered life.

I was emotionally invested in the Morrison family so deeply that I cried for the children when tragedy struck them all and yet I was impressed by their quiet resilience, their focus on family and their support of one another.  Their life was both tragic and rich with the bonds that tied them.

While the Morrisons are blessed with a sense of family bond there are other families in the town that are plagued with histories that seem to be doomed to repeat themselves. Their lives are entwined with the Pyes not only in Kate’s own lifetime but throughout history and added a huge amount to the overall scene.

The novel is mainly centered around Kate as she narrates the story and I found her a bit cold if truth be told.  I suppose her rearing was unconventional and her losses were many but as she was also so close with brother Matt I found it unnatural that she would be so aloof.  I had a very hard time relating to her as an adult and was frustrated by her relationship with her boyfriend. There is a huge gap of time between her childhood (which is explored deeply) and the woman in her 40’s.  I wish we had been given more about the intervening years to show us how she ended up so much more guarded as despite her great loss I would have expected the warmth she began life with to follow through a more into her adulthood.
Crow Lake is an interesting read and I enjoyed it for it's exploration of family dynamics.