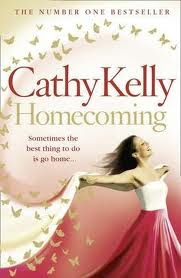 What are the ingredients for a life well lived?

Eleanor Levine left Ireland years ago with just a suitcase and her mother′s recipe book. And now, a lifetime later, she returns from New York for Dublin′s beautiful Golden Square full of memories and hard-won wisdom. As she watches life unfold from her window, she is drawn into the lives of the women who live in the square ...

Beautiful actress Megan Bouchier had fame and success in her grasp - then she made the wrong kind of headlines. Now she needs a place to hide. Big-hearted teacher Connie O′Callaghan is approaching forty and has given up on love. Why does no man match the heroes in her romantic novels?Rae is a loyal friend and wife, dispensing tea and sympathy from Titania′s Tea Room -- until a secret threatens everything she holds dear ...

I thoroughly enjoyed Homecoming!  I can’t recall how long it’s been since I’ve read some Brit Lit, or Irish Lit and this was a great, fun read.  There is something distinctly different about this genre and the novels always make me want to move to a small town across the pond and cozy up with my neighbours.  There is something so friendly and honest with these books and even the ‘villains’ never seem so terrible.


Homecoming intertwines four women, but at no point was I ever confused. It flows seamlessly and I was eager to see how each woman would resolve their particular conflicts. I loved the cross section of women portrayed. There is truly something in this novel for everyone.  I enjoyed Connie’s character immensely and loved her sarcastic humour about herself and her situation and cheered for her to open her eyes.  I also loved Rae’s story with her secret and how it unfolded.  I found the relationship that developed between Eleanor and Megan’s touching.


I could picture the square they all lived on vividly and wanted to move into a flat there too, although can’t recall much time in the novel spent on too much detail.  More attention is paid to each character and their particular plights, which I appreciated, rather than overly descriptive prose about the setting.


Homecoming made me realize how much I loved these stories and that I’ll definitely have to make a point to pick them up more often!  I had a smile on my face for most of this novel and that’s such a lovely way to read a book!


I’ve always enjoyed Kelly’s novels and read right through Homecoming with the same enthusiasm.  Lately her novels involve many characters whose stories intermingle and I found myself relating to each of the main storytellers despite their very different ages and stages of life.  Although each main character has equal time dedicated to them I was most fascinated by the lives of two of them- Eleanor and Rae.
Eleanor is in her eighties but despite our age difference I was drawn back to her story each time because she’s dealing with the overwhelming grief of losing her husband and can’t seem to focus on who or what she should do to move on with her own life- she has a daughter and grand-daughter she obviously cares for deeply but even they aren’t able to lift her depression.  I think that many people can relate to her situation because of the raw emotion she feels and I liked the way Kelly told us about her grief without making Eleanor into a bore- she had a huge amount of depth to her.
Rae found her way into my heart initially because she was very energetic and constantly on the move.  She seemed like the kind of friend and neighbour everyone should have around.  She had a dedicated husband, a grown up son and volunteered in her neighbourhood but Cathy Kelly also gave her a baby, given up for adoption when she was sixteen, and with the introduction of that storyline I got completely engrossed in Rae and how she came to be the person she is today.
Cathy Kelly writes a completely defined set of characters and places so that you are visually aware of the story as it unfolds and I appreciate that wholeheartedly. Though I was occasionally frustrated by some of the minor moments between personalities I know that the honesty of the feelings is what made it a well-rounded story- and realistic!
A read I definitely enjoyed!
Thank you to HarperCollins Canada for our review copy. All opinions are our own.