I've Got Your Number by Sophie Kinsella 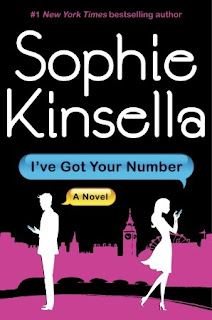 I’ve lost it. :( The only thing in the world I wasn’t supposed to lose. My engagement ring. It’s been in Magnus’s family for three generations. And now the very same day his parents are coming, I’ve lost it. The very same day! Do not hyperventilate, Poppy. Stay positive :) !!

Poppy Wyatt has never felt luckier. She is about to marry her ideal man, Magnus Tavish, but in one afternoon her “happily ever after” begins to fall apart. Not only has she lost her engagement ring in a hotel fire drill but in the panic that follows, her phone is stolen. As she paces shakily around the lobby, she spots an abandoned phone in a trash can. Finders keepers! Now she can leave a number for the hotel to contact her when they find her ring. Perfect!

Well, perfect except that the phone’s owner, businessman Sam Roxton, doesn’t agree. He wants his phone back and doesn’t appreciate Poppy reading his messages and wading into his personal life.

What ensues is a hilarious and unpredictable turn of events as Poppy and Sam increasingly upend each other’s lives through emails and text messages. As Poppy juggles wedding preparations, mysterious phone calls, and hiding her left hand from Magnus and his parents . . . she soon realizes that she is in for the biggest surprise of her life.


Kinsella has done it again with I’ve Got Your Number. Her latest might have even debunked Twenties Girl from my most favourite of her novels which speaks volumes because I adored that one too.
I have no idea how Kinsella creates such horribly misguided, yet completely loveable and believable characters and creates situations for them that should never seem plausible, but they totally do. Maybe its because she creates normal female characters we can all relate to. Women who make a mistake or two or who end up in awkward situations or are sometimes embarrassed or doubt themselves or feel slightly less than she should at times or does things for others and never herself. Someone with doubts and fears and hopes and dreams and imperfections and is kind and caring and hopeful. You know, someone normal.

I appreciate that she’s made the main characters in her last two non-Shopaholic novels less scatterbrained than Becky Bloomwood because as much as I've enjoyed the Shopaholic series, I just can’t fathom some of the stuff Becky does and the novels are less believable for me because of it. In I’ve Got Your Number, although I didn’t always agree 100% with her decisions – and she still makes some interesting ones - Poppy has her reasons and they aren’t completely out of my realm of realism even though they’re not necessarily something I would do myself.
I adored every sentence in this novel and laughed my ass off on almost every page. People slowly started moving away from me on the subway with my chuckles, snorts and attempts to stifle my giggles. The miscommunication blunders and Poppy’s assumptions and conclusions always lead to humourous situations in typical Kinsella style. And even through the humour, this was the first Kinsella novel that made me choke up. I shed tears, which really surprised me. There were a few scenes and some heavier aspects to I’ve Got Your Number which I really enjoyed and appreciated.
The entire premise of how personal and how much of one’s life a cell phone holds was fascinating to me, even though I know it’s true. I have a tablet now that I share from time to time when I’m not reading and have found it interesting to manage folders and favourites and wondered about adding email accounts, but I already have so many of my own that I might have to draw the line.  Especially after reading some of the situations in this novel!

One frustration to me about this novel was the footnotes. The copy on my e-reader wouldn't flip back and forth, maybe due to it being an advance readers edition, but it was annoying that I couldn't read them in sequence to the story and felt I was missing out, especially on giggles as Poppy's thoughts and insights were always amusing.
Fans of Kinsella will definitely not be disappointed!

Thank you to Random House for our review copy! All opinions are our own.