The Reunion by Roisin Meaney 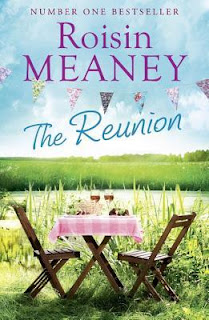 It's September 2015 and sisters Caroline and Eleanor Plunkett receive invitations to their twenty year school reunion. But for both, the invitation takes them back to a time they'd rather forget ...

For Caroline, it's a reminder of a night she's never told anyone about - and the traumatic consequences she had to face on her own.

While for Eleanor, who has spent the past fourteen years trying to get over the death of her young daughter, the school reunion is a stark reminder of life before grief.

As the reunion approaches, both sisters face choices and decisions about their lives. Caroline, a successful knitwear designer living in England must choose between love and honesty. Eleanor, who long ago removed herself from the restaurant she started with her husband, must finally make a decision to choose the man she married and the son she has forgotten for so long.

The Reunion took a number of tricky family dynamics and put them together in a novel that covered two time period in sisters' lives.  Their teenage years were mostly focused on Caroline and an event that shaped her future and for Eleanor her present day story as an adult is monopolized by a recent part of her history.  An invitation to their high school reunion opens up Caroline's past and makes Eleanor consider her commitment to her family.

I found the connection between the two women interesting.  As teenagers Eleanor wasn't able to comprehend the horror of what had happened to Caroline and yet she still felt that her sister had been neglected by their mother by her blatant lack of support.  Despite years of unease there was still a tenuous bond as sisters and mothers that brought them back to helping each other. My feelings for their mother were probably pretty obvious but what made her behaviour more inexcusable was that their father seemed to grasp the damage that was being done in pushing their child out the door and she refused to relent.  Having been sent to England, to not bring disgrace on the family, Caroline was lucky to be given warmth and support by distant cousin Florence.  Their relationship was built on respect and understanding which just highlighted her conflict with her mother.

Eleanor's story of loss was raw.  The loss of their child was visible in her marriage and her relationship with her teenage son, he had also lost his mother by default. I can’t imagine how the guilt weighed on her but
felt myself only partially accepting her ways of coping with her tragedy as her son’s needs were so very visible to her.

For both sisters the loss of a child shaped their present though their losses occurred very differently. Despite the painful subject matter I was engrossed in their stories all the way through.

Thank you to Hachette Books Ireland for our review copy.  All opinions are our own.