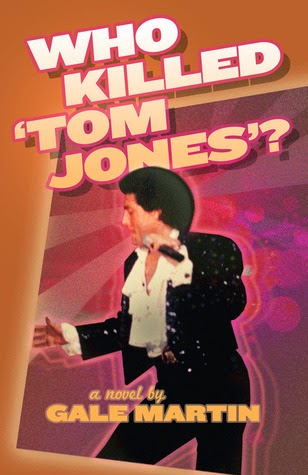 Ellie Overton is a 28-year-old rest home receptionist with a pussycat nose who also happens to be gaga for the pop singer Tom Jones.

Regrettably single, she is desperate to have a red-hot love relationship, like those she’s read about in romance novels. Following an astrological hunch, she attends a Tom Jones Festival and meets an available, young impersonator with more looks than talent. Though he’s knocked out of the contest, he’s still in the running to become Ellie’s blue-eyed soul mate—until he’s accused of killing off the competition.

It’s not unusual that the handsome police detective working the case is spending more time pursuing Ellie than collaring suspects. So, she enlists the wily and witty rest home residents to help find the real murderer. Must Ellie forfeit her best chance for lasting love to crack this case?

When I read the synopsis of Who Killed 'Tom Jones'? by Gale Martin, I was entertained. The novel sounded like a fun murder mystery (that seems like an oxymoron...) and I was looking forward to it. Unfortunately, it just didn't do much for me.

The reason I gave the novel 2 stars (instead of 1 or a DNF) is because I wanted to keep reading to find out who the murderer was. If I hadn't wanted to know the whodunit, well, I may not have finished the book. Harsh, I know. It's not that the story was bad. It wasn't, really. I just wasn't exactly a fan of the writing. There were awkward sentences and sometimes the tone seemed so out of place. Let's not even get started on the one sex scene. OK, I started. It was flowery and belonged in a bodice ripper...totally not the right tone for this book. There were other times where the word choice was odd and when I wished the editing of the novel had been better.

Like I said, the story wasn't too bad. It was kind of entertaining – a murder at a Tom Jones impersonation event? Where the main character wants to find out who did it and is being helped by a madcap group from the residents of the rest home she works at? It promised the kind of hilarity I look for in a murder mystery, since I'm not one to read hardcore mysteries. The book was funny as it worked its way through the investigation but there was something, maybe the writing, that kept me from being really committed.

So, Who Killed 'Tom Jones'? was not a winner for me. Gale Martin has an entertaining enough story on her hands but I think the writing needs to be tightened and polished just a bit more.

Thank you to the author for our review copy. All our opinions are our own.